Mileage: in 1989 AASHTO listed a figure of 341 miles for US 411... but that was assuming an endpoint in Greeneville.  The route has been truncated to Newport, and our own 2020 measurement yielded 310.1 miles.  Historically, when it went to Bristol, US 411 was 394.9 miles long.
From the time US 411 was commissioned in 1934, it was envisioned to go north all the way to Bristol.  Perhaps the road through Tennessee was not yet up to standards; for some reason the designation was not immediately signed in that state.  From Gadsden, US 411 ran through northwest Georgia (as it does yet today), but its north end was "on hold" at the stateline for about five years (near the aptly-named community of Tennga), waiting for Tennessee to pick it up... 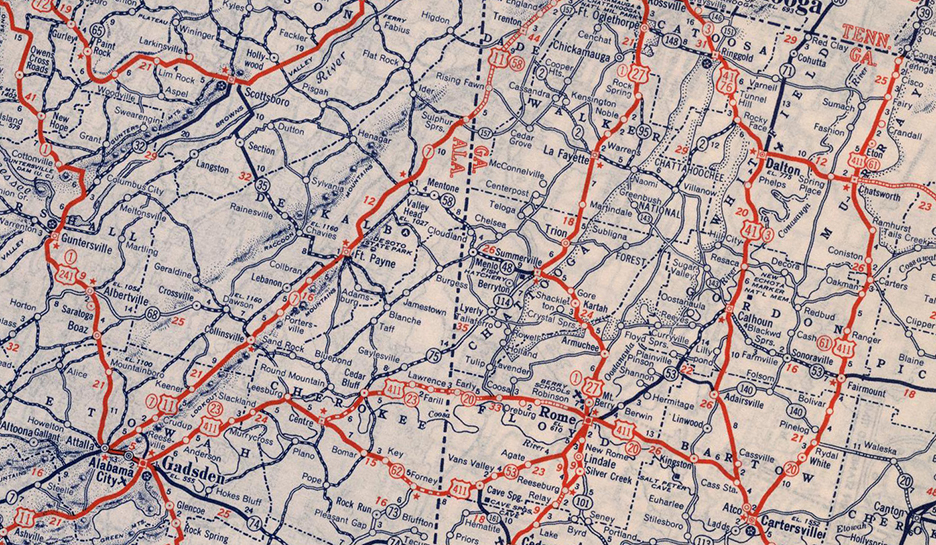 c. 1940, Rand McNally
By 2014 that sign had been removed, and by November 2015 traffic along that northernmost segment of US 411 had been redirected along a new alignment running about a half-mile to the west (more on that below).  At the former junction with US 25W-70, old US 411 was vacated.  The photo below shows how the road now veers slightly to the left, but the original alignment is marked by the shadows of the overhead powerlines.  A small green Newport city limits sign still stands, but it is now sitting incongruously in the middle of the newly-seeded grassy area: