Although one can make a pretty good case that 8th and Broadway marked the terminus of both US 22 and US 127, this next map shows something slightly different:

c. 1940, ODOT
US 127's endpoint is even more difficult to pinpoint; although the map below shows quite a bit more detail, the terminus of US 127 is still unclear: 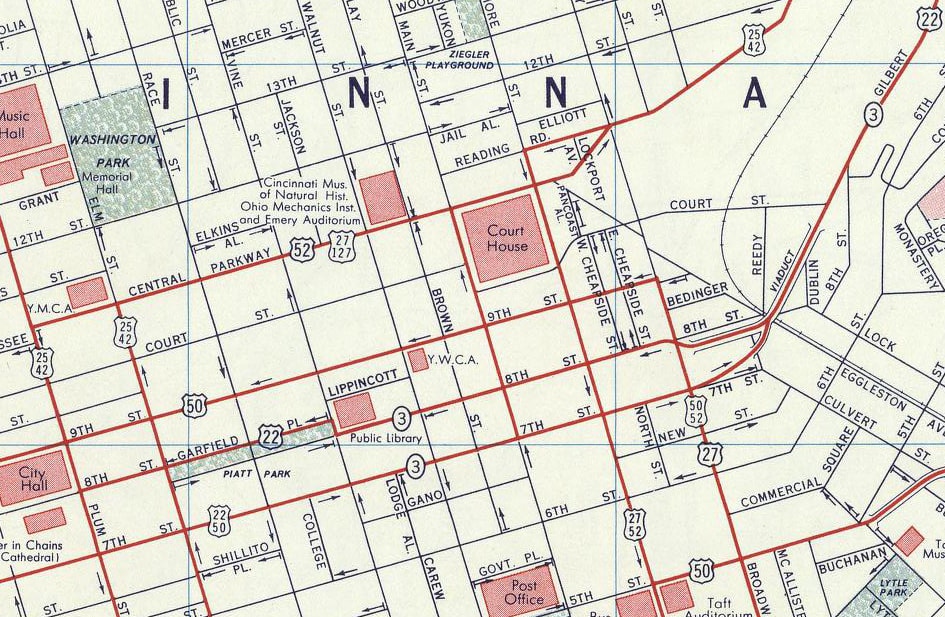 c. 1956, Gousha
That was published just a couple years before US 127 was extended out of Cincinnati.  The southernmost US 127 marker was on Central Parkway, which also carried US 25-27-42-52.  If the intention was to have US 127 junction with US 50, then it seems like traffic would have been directed to simply stay on Plum.  So that may indicate that US 127 terminated at the courthouse (which was a common practice during the early years), or else it still went to 8th and Broadway (or technically 7th and Broadway by that time, since traffic had been separated into one-way couplets).  Note also that by then the routing of US 22 had been changed.  Nearly matching today's configuration, traffic used the 7th/8th couplet, with the designation terminating at Plum, which carried US 25-42.
What about US 27 and US 42?  This is only speculation, but it seems logical that they also would have ended either at the courthouse or at 8th and Broadway.  At any rate, US 27 was extended beyond Cincinnati by 1928, which may have been before it was even signposted.  And US 42 was extended out of the city by 1932.  That was the same year US 22 was extended into the city, and two years later US 127 was extended to Cincinnati, where it ended until 1959.  (It should be noted here that in the 1959 documentation sent to AASHO regarding the proposal to extend US 127 from Cincinnati to Chattanooga, ODOT implied that US 127 signposting ended at its junction with US 27 in the Northside area, although the map they provided still showed US 127 marked all the way into the downtown area.)
Research and/or photo credits: Jeff Morrison; Mike Roberson; Dale Sanderson
Page originally created 2008;
last updated Mar. 13, 2021.