In the beginning (1926), El Paso was served by only two US routes - one of which ceased to exist in the 1930s, and the other has not been seen in these parts since 1991.  US 80 came in from the east on Alameda Avenue, which angles southwest and heads downtown as Texas Avenue.  At Mesa Street, US 80 took a turn to the northwest and headed out of town.  In other words, US 80 followed the routing of today's TX hwy. 20.  ​
The following year, El Paso welcomed the arrival of another US route: highway 62 was extended west from Carlsbad NM.  It came into town on Montana Avenue, which junctioned with US 70 at Piedras.  From there the two routes were co-signed south, and at Alameda, they joined US 80.  US 62 then shared US 70's endpoint, on Texas at Mesa.

By 1935, US 70 had been rerouted again, and so the north-south highway coming into El Paso received its third number in less than a decade: US 54.  It ended at the same place where US 70 had before, and US 366 before that.  That is the arrangement shown on the earliest El Paso highway map I have seen, which is dated 1937: 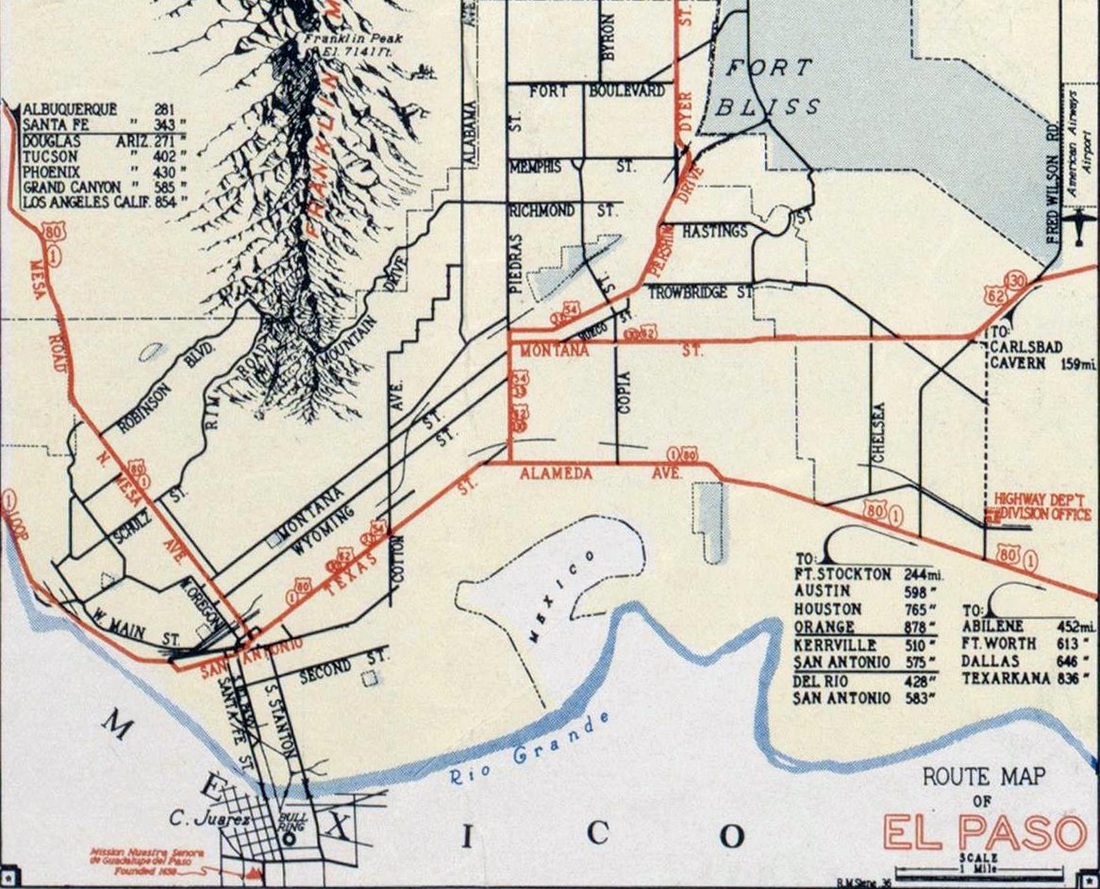 c. 1937, TXDoT
Westbound US 62-180 came in from the left on Montana, but eastbound began to the left one block ahead, on Yandell.  That carried US 62-180 traffic from Mesa to Copia Street, where drivers were directed north to join westbound traffic on Montana.  US 180 did not end there for long -- in 1961 that designation was extended westward out of El Paso -- but US 62 continued to end at Mesa until 1974.
No US 85, but there is a repurposed Texas state highway sign referencing Mexico highway 45 (there are actually quite a few of these in the area, including some that are placed in perplexing locations).  Until 2019, traffic coming in from Mexico (using the El Paso St. crossing) was immediately on US 62-85, but this was the lone sign that greeted those arriving in the U.S.:
So things are kind of screwy now: drivers coming in from Mexico on El Paso St. are not on a designated highway (even though there are still some highway signs on El Paso).  On the other hand, drivers leaving the U.S. via Stanton St. are on a designated highway, even though there are no signs to indicate that.

​That leaves only one more change in terms of endpoints, and it is unclear what year this happened, but at some point, US 54 was changed slightly, such that it no longer goes all the way to the BOTA crossing, but rather it ends nearby at its interchange with TX 375 (the Border Highway).  Photos from that terminus are on the main US 54 page.
Research and/or photo credits: Raymundo Aguirre; Chris Elbert; Karin and Martin Karner; Dale Sanderson
Page originally created 2006;
last updated Sep. 21, 2019.