When the US highway system was first implemented in 1927, US 32 and US 61 were the only routes serving the area, intersecting in Davenport.
(At that time, the area was not known as "Quad Cities".  There were only three cities (Davenport, Rock Island, and Moline), and although the term "Tri Cities" was used locally, it was not well-known outside the area.  Soon East Moline grew enough to be brought into the fold, and by the 1960s the area was commonly referred to as "Quad Cities".  By the 1970s, the population of Bettendorf surpassed that of East Moline, and some thought the name should be updated to "Quint Cities".  Although that term is still used today in some local business names, it never achieved broad acceptance.  The name "Quad Cities" is the one that stuck, even though today there are about a dozen more suburbs contiguous to the five cities, as well as approx. two dozen additional towns included in the greater metro area.)
Here are several more photos of that bridge (and even a video).  In 1931, the US 6 designation was extended west along US 32.  As a result, the US 32 designation was retired in Iowa, but Illinois opted to keep it for a couple more years, so during that time US 32 ended with US 67 on the Government Bridge.  That was the situation illustrated on the map shown below: 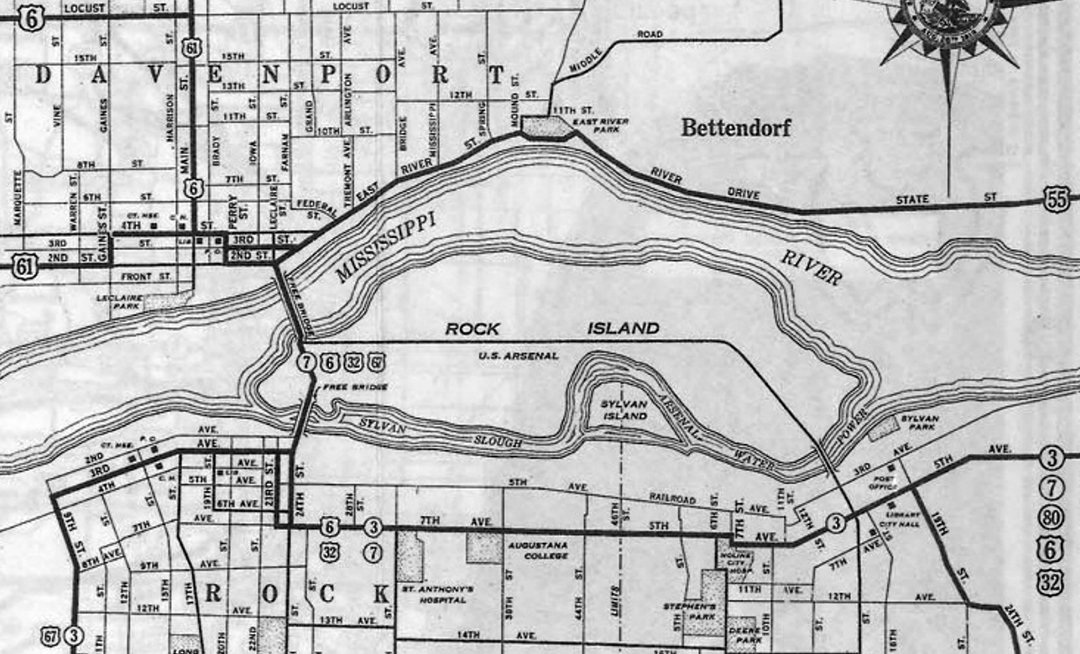 c. 1932, Illinois DoT
After the 1932 issues, the Quad Cities insets were removed from both the Illinois and Iowa maps for a few years.  In 1933, the remainder of US 32 was decommissioned, so the entire east-west route through the area was signed only as US 6.
That shield is a holdover from when the bridge originally opened to traffic in 1940.  Miles recalls that there was also a US 150 sign there during the '50s.  When the bridge was renovated in 1996, two old white guide signs were removed and replaced with the more standard green ones shown above.  But instead of replacing this shield, they painted it green (presumably to match the new guide signs) and put it back up!  It is unclear whether that was when the US 150 sign was removed, or if it had already been removed twenty years earlier (when US 150 was truncated to its current terminus).

The next year (1941), Iowa renumbered a highway running northwest out of downtown Davenport as IA 150.  Clearly this new highway number was based on US 150, but apparently Iowa never petitioned to have the US 150 designation extended into their state.  Miles says that there were no US 150 signs on the Iowa side of the river heading northbound -- instead, there were IA 150 signs.  Heading southbound, IA 150 signs were used to direct traffic onto the Bridge, but as soon as a driver was on the bridge, a US 150 sign was posted (along with US 67).  This was before one reached the toll plaza, so it was still on the Iowa side... which perhaps explains why a 1955 route log lists "Davenport" as US 150's terminus (rather than "Rock Island").

In 1968, IA 150 was again changed, this time to its present number, IA 130.  Perhaps this number was chosen because Iowa considered the highway to be a spur off US 30.  But why did they bother changing the number at all?  Possibly because Illinois had shared their plans to truncate the US 150 designation.  I suggest this because their 1972 map was the first to remove the US 150 duplex with US 6 along 19th Street in Moline.  At any rate, it was 1976 when US 150 was officially truncated to its current terminus near Coal Valley.
Research and/or photo credits: Steve Alpert; Jake Bear; Monte Castleman; Jason Hancock; Jeff Morrison; Miles Rich; Dale Sanderson
Page originally created 2004;
last updated Dec. 20, 2016.