Mileage: in 1989 AASHTO listed a figure of 701 miles for US 97... however, that included the mileage of US 97's associated alternate route.  According to the state subtotals on AASHTO's 1989 spreadsheet, mainline US 97's actual end-to-end total at the time was 663 miles.  That closely matches our own 2020 measurement, which yielded 664.7 miles.

Claim to fame: US 97 was the only US route designation that the state of Alaska ever applied for (read more about that proposal).  ​But it was never signed in Alaska, so the north terminus of US 97 has always been at the Canada border a few miles north of Oroville.  This 1950s shot was taken looking south at the historic customs houses: 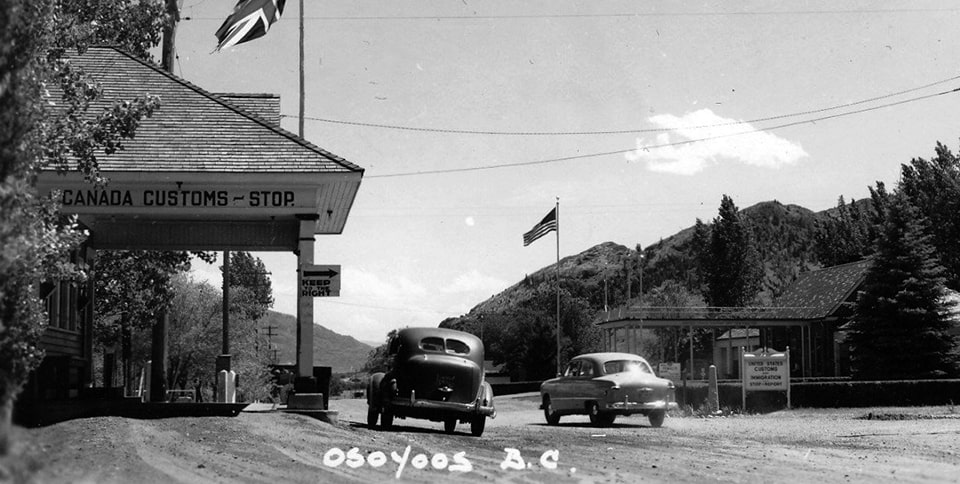 c. 1950 (linked to original)
Heading the opposite direction, here is the north beginning of US 97 (viewed from the Canada border), the first US 97 sign (immediately after clearing customs), and a "Welcome to Washington" sign:
That last image shows the first southbound US 97 trailblazer, and here are some additional shots of that:
The original US 97 ran entirely along the west bank of the Okanogan and Columbia rivers, all the way from Oroville to Wenatchee.  The highway has been upgraded over the years, and in three different stretches US 97 has been rerouted onto newer segments along the east banks of each valley.  The old segments are still driveable, and one of them -- the stretch between Chelan and Wenatchee -- is now signed as Alternate US 97.
These photos were looking the opposite direction (southbound on old US 99); to the left was the old south beginning of US 97:
Note the exit number: that is a long way from San Diego.  There are only two interstates that are long enough through a single state to have exit numbers that high: this one (I-5 in CA) goes up to exit 796, and I-10 in Texas goes up to exit 880.
Research and/or photo credits: Paul Dienhart; Chris Elbert; Tom Fearer; Alex Nitzman; Mark Roberts; Dale Sanderson; Michael Summa
Page originally created 2001;
last updated Sep. 12, 2022.