Many of us are familiar with a recurring joke that is often framed as a question, but is actually more of a commentary: "Why are there interstate highways in Hawaii?"  After all, at first glance it seems illogical that there would be an interstate which exists only in a single state, despite the fact that its very name indicates that it should cross a state boundary.
The short answer is that both classifications (Interstate highways and US highways) were envisioned as a network of routes that would support the majority of travel throughout the country... keeping in mind that some important connecting routes would be entirely within one state.  One of the prime examples is Interstate 45, which connects Dallas and Houston, and therefore obviously  exists only in Texas.  It would be difficult to make a convincing argument that the 4th- and 5th-largest metro areas in the U.S. should not be linked by an interstate highway.
The same rationale applies to the Interstate system's predecessor, the US highway system.  The US routes served as the nation's original "inter-state" network, created to aid travelers by providing a unified numbering scheme that was consistent across state lines.  Nevertheless, some important connecting routes were located entirely within a single state, so they were included in the US route system.

One can certainly disagree with that rationale and perhaps build a good case against it.  But let it never be said that the US highway system was not intended to include intra-state routes, because that is simply not true.  ​
Intra-state US routes have been around since the very beginning.
So single-state US routes have existed from the outset; in fact they comprised a significant percentage of the total.  And during the next decade, several additional intra-state routes appeared.  Primarily this happened because AASHO continued to commission new single-state US routes.  But in a few cases, some existing US routes became single-state routes because they were truncated in such a way that all of their mileage in a neighboring state was eliminated.
During the first decade of the US highway system, AASHO commissioned several new intra-state routes.
Following is a timeline for the decade 1927-1936, showing all gains and losses of single-state US routes, including a year-by-year running total:
​
​1927 1928 1929 1930 1931 1932 1933 1934 1935 1936
At any rate, AASHO had clearly reached a point where they believed a change was necessary, and they began to emphasize the fact that state highways were perfectly capable of facilitating intra-state connections.  This had an immediate impact: within just two or three years, the number of single-state US routes was quickly reduced by 17 (and after that the count continued to drop, although much more gradually).  Following is a continuation of the timeline for the next three decades (from 1937 through 1969).  By the end of this period, the overall number of intra-state routes had been reduced by half:
1937 1938 1939 1940 1942 1943 1945 1947 1948 1949 1951 1952 1953 1954 1955 1957 1959 1961 1963 1964 1966 1967 1968 1969
Even after 1937, a few new intra-state routes were still created.
Despite AASHO's 1937 edict, a few additional intra-state US routes were still created during the 1940s through the '60s -- nine, to be exact.  It should be noted that only five of them were newly-commissioned, whereas the other four simply became single-state routes due to truncations or reroutings (US 46, 58, 158, and 195).  But still, why did AASHO allow the five new intra-state routes?  Here is my take: the verbiage of the 1937 document specified "...no new US route..." (emphasis mine).
The only exception was US 159, which was commissioned as a Kansas-only US route.  This waiver was granted because it was always the understanding that the route would soon be extended into Nebraska and Missouri (more about that on the US 159 page).

Exceptions notwithstanding, overall the number of intra-state US routes steadily declined after 1937, which suggests that for many years AASHO continued to push their agenda of eliminating them.  In the minutes of their June 1970 meeting, they even included a list of single-state routes that were still in existence at the time: 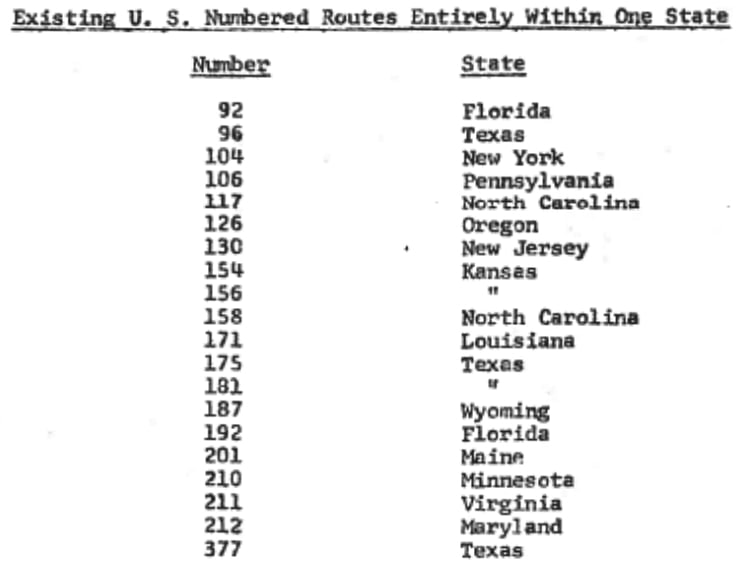 So that leaves 18 routes, but it would be an error to assume that list was complete... because we should also note several routes that were overlooked.  At the time, there were not 18, but actually 35 single-state US highways -- nearly twice as many as were listed.  17 additional routes should have been included, as follows:
1970 1971 1972 1973 1980 1981 1982 1987 2012
Currently the US route system still includes 19 intra-state routes.
Of those 20, 11 were among the inaugural routes of 1926 (shown in bold below).  Here is the current list of single-state US routes (with some notes), sorted in order of approx. mileage:
Which state currently has the most intra-state routes?  And what about historically?
An examination of the list above reveals that five of the 20 current single-state routes are in Texas.  As it turns out, Texas has had a minimum of four intra-states ever since the US route system was inaugurated in 1926.  And during the 1930s it actually claimed six.  Maybe that should not be surprising, given the size of Texas.  However, six is not the most that any state has ever had.

Way up at the top of this page, the 1926 list shows that Pennsylvania had eight intra-states at the time... although that is a bit misleading, because by the time Pennsylvania actually began signposting their US routes in 1928, they were down to seven.  Still, there is no question that Pennsylvania was very fond of their intra-states for a long time: they held on to seven of them all the way until 1963, a span of 35 years.  On the other hand, once they decided to start eliminating their intra-states, they were quick about it: within a decade, all but one was gone.
Should the surviving intra-state routes be eliminated?
People who have put some thought into single-state US routes are generally divided on how they should be handled going forward.  Some are of the opinion that they should be allowed to remain, for various reasons (e.g. they have been in the system since the beginning; important connecting routes should not be required to cross a state line; they don't do any harm so it's not worth the hassle and expense of changing them; etc.)  Others insist that intra-state US routes are not appropriate, and that they should be replaced with state highway designations.
There are also several defacto intra-state routes.
For those who think the state DOTs should decommission their intra-states, I think it is only fair to also take a position on what I call "stealth violators".  These are US routes that often escape scrutiny because -- although they do enter a second state, they do so only for a very short distance -- so in a practical sense they are de facto single-state routes.  What should be the minimum mileage in a second state for a highway to be considered a "legitimate" US route?  The answer is open to debate, but the list below includes those with 15 miles or less.  In my opinion, some of the following stealth violators are even worse than some of the actual violators listed above.  These are sorted in order of total mileage in the second state:
US route shield images courtesy of Michael Summa.  Research and/or photo credits: Nathan Edgars; Mike Roberson; Dale Sanderson
Page originally created 2020;
last updated Feb. 12, 2022.