Mileage: in 1989 AASHTO listed a figure of 1399 miles for US 77... however, that included the mileage of US 77's associated business/bypass/alternate routes.  According to the state subtotals on AASHTO's 1989 spreadsheet, mainline US 77's actual end-to-end total at the time was 1305 miles.  That closely matches our own 2020 measurement, which yielded 1303.0 miles (reroutings and realignments likely explain the difference).  Historically, when US 77 went to Ortonville, it was 1530.6 miles long.
This last segment of the road was likely realigned when the new US 12 was built to the right.  The original US 12-77 probably curved slightly to the east and met US 75 just to the right of this intersection (right about where MN 7 splits off to the south today).  US 77 would have ended there at a fairly straightforward four-way junction with US 75.  US 12 would have continued straight through this intersection (as opposed to having a jog, like it does today where it multiplexes with MN 7), and then continued east along Oak Avenue.
There we are looking eastbound on US 12 at its junction with MN 7 (old US 75); US 12 continues to the right with MN 7.  After one block, the mainline (US 12) veers left, continuing eastward again, while southeastbound MN 7 is a right turn.  If a driver were to turn right before they reached that next junction (heading west, across the railroad), they would be on the original US 12... and probably also on a historic north beginning of US 77.
Today Sinton carries both US 181 and Business 77, which continues to the left on Vineyard Avenue.  For about two years, the south beginning of US 77 to the left, but then in 1935 the US 77 designation was extended further south: co-signed with US 181 into Corpus Christi.  In 1945 the US 77 designation was removed from the segment between Sinton and Corpus; instead the route followed its current corridor through Kingsville and all the way down to Mexico at Brownsville.

At their Oct. 1981 meeting, AASHTO approved the truncation of the north end of US 77 to its current terminus in Sioux City.  (Actually, the language of their approval shows that it was truncated to the Iowa-Nebraska state line, but Iowa DoT considers US 77 to extend just north of there, to its junction with I-29.) ​ 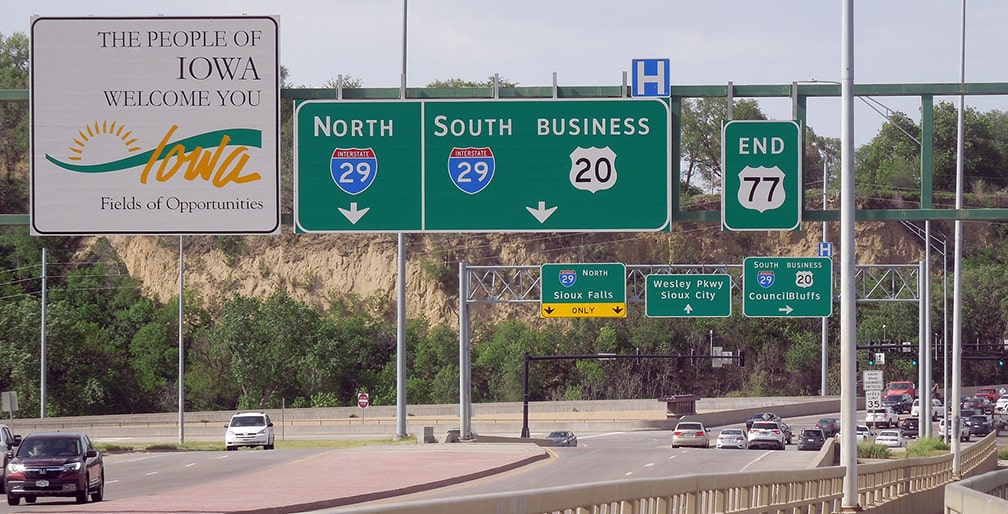