Amarillo may well be the grand champion of decommissioned highways (or grand loser, depending how one looks at it): of the eight US routes that have served the city, five of them no longer exist.  That could be a misleading statement, though, so to clarify: it is not that the roadways themselves have disappeared.  Rather, Amarillo was originally served by several shorter branch routes, which were later swallowed up by extensions of longer routes.  As a result, several US route numbers that once graced the streets of Amarillo have been retired -- perhaps more than any other city.
On the map above, the road heading southeast from Amarillo to [the unnamed junction which we will presume for now to be Claude] is today's US 287.  The curving segment of US 66 heading northeast from its junction with US 370 was, um... completely fictional.  Well, maybe not completely: it did exist on paper, but only in the form of proposals and plans.  Among the many things I have learned from the research of Jim Ross and Jerry McClanahan is: that diagonal was proposed along the right-of-way for a railroad grade.  But that railroad was never built, nor was an auto road built to follow its corridor.  Furthermore: even if that road had been built, its junction with US 66 would not have been in Claude.  Already by Feb. 1927, when AASHO asked TXDoT to review their maps and route logs for accuracy, Texas responded with the following correction:

Did this junction located "northwest of Claude" have a name?  And how many miles is "a few"?  Since TXDoT did not specify those details, AASHO continued to use "Claude" as its control point.  It wasn't until 1930 that AASHO finally clued in that the US 66 - US 370 junction was not in Claude, but rather in Washburn.  Correspondence indicates they were made aware of this detail not by TXDoT, but instead by a third-party commercial cartographer.  In April of that year, upon realizing this distinction, AASHO sent a letter to TXDoT; below is an excerpt:

(Incidentally, US 164 made its first appearance on that map, but we will address that later).  Actually, the map above was not accurate either.  Why?  Because US 66 traffic was never directed to dip down to the south to pass through Washburn.  Rather, it always went directly east-west between Amarillo and Conway...
That was westbound US 66 (which continued to the right on 6th), and southbound US 385 (which continued straight ahead).  Also straight ahead was the beginning of US 366 and US 370.  That photo shows the perspective of a driver at the historic west end of US 164, and later at the end of US 60.
US 66 never went through Washburn
Back to the controversy, you might be thinking, "Wait a minute, there are lots of other maps that show US 66 dropping to the south to join US 370 somewhere southeast of Amarillo."  Yes, I am aware of those maps (in fact, many of them are displayed at the bottom of this page).  But those maps reflected a planned route that never came to fruition.  They did not illustrate the actual routing in the field.  (In my opinion, this makes the 1927 RMN map [shown above] remarkable for being the only early map to illustrate the actual conditions... which in turn leads me to speculate that RMN might have been the only company to actually field-check their map, rather than relying solely on source material from AASHO and/or TXDOT.)

"Not so fast", you might counter.  "How can you discount all the written material (shown above) from both AASHO and TXDOT?"  From what I can tell, when TXDOT referred to US 66, they were actually referring to the unbuilt routing that they had approved and were planning to construct.  But it seems they were not transparent about that with AASHO, and for that reason AASHO was initially not aware that US 66 did not actually go through Washburn.

How do we know this?  Again, I am indebted to the research of Ross and McClanahan, who provided me with the following newspaper articles from the Amarillo Globe-Times.  This first one, from April 1928, implied that the then-existing route of US 66 came into town via North Fillmore: 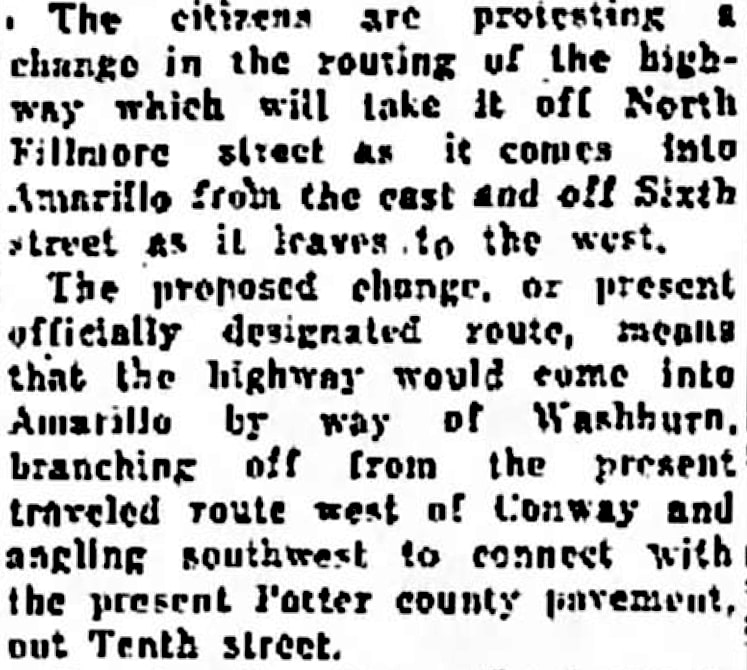 US 66 would not have used North Fillmore if traffic had been coming in from Washburn.  Note also the statement that "the proposed change... means that the highway would come into Amarillo by way of Washburn..."  This next clipping is from Sep. 1930; note that the second paragraph states that the then-existing route was still using North 8th and North Fillmore:
Now that we have a good overview of the early changes that took place in the US route system around Amarillo, we will move on to the specific routings of those highways through the city.  Again, US 385 ran along Fillmore Street.  US 66 also used Fillmore, but only along the one-mile segment between North 8th Avenue and South 6th Avenue.  US 66 heading west out of town used S. 6th, and N. 8th (now Amarillo Boulevard) was the routing for eastbound US 66 traffic.
US 366 approached Amarillo from the south, overlapped with US 385.  As for US 370: despite early route logs and maps indicating its west endpoint was at Claude, we have established its junction with US 66 was actually in Amarillo.  Traffic would have come into town on South 10th Avenue.  So US 370 and US 366 joined at the intersection of Fillmore and S. 10th, meaning it is possible that one of the designations could have ended there, or both routes could have shared a common terminus there.  But based on signage practices that were common at the time (especially in Texas), I think it is far more likely that the three routes (385, 370, and 366) were overlapped north on Fillmore, with both US 366 and US 370 sharing a common terminus at S. 6th (junction US 66).
In 1928, US 164 was commissioned to serve traffic coming into Amarillo from the northeast.  US 164 arrived via today's US 60, so the designation could have ended at its junction with US 66 (at or near the junction of today's Amarillo Blvd and Triangle Drive), or where US 66-164 met US 385 (Amarillo Blvd at Fillmore).  However (this theme should be familiar by now) it is more likely that US 164 would have been co-signed with US 66-385 down Fillmore to the main highway junction at the center of town... in other words, the same endpoint as US 366 and US 370 (which causes one to wonder why US 164 was not numbered as a northeastward extension of US 366 instead).
The year after that map (1939) a southeastward-expanding US 287 eliminated the US 370 designation.  And the fifth (and final) US route to be removed from Amarillo was US 66, which was decommissioned in 1985.  What this means is: every one of the seven original US routes that branched out of Amarillo in the 1920s has been renumbered.

​So, to reiterate: while it is possible that some routes ended at Fillmore north of downtown (on N. 8th, or Amarillo Blvd) and others may have ended to the south (on S. 10th), it is more likely that all four of them would have been signed to the central highway junction (at S. 6th).
Research and/or photo credits: William Bacon; Robert Droz; Nathan Edgars; Jerry McClanahan; Mike Roberson; Jim Ross; Dale Sanderson
Page originally created 2006;
last updated Jun. 29, 2022.