The 1966 map shown above appears to be the earliest Astoria inset included on Oregon official highway maps.  Clearly by then traffic had been split into the one-way couplet of Commercial and Marine Drive.  When that was implemented, then southbound US 101 would not have been directed to the right on Commercial (as shown on the 1938 photo above), but instead to the right on Marine.  So when did that happen?  The 1951 map below shows highway traffic leaving Commercial via 14th and then resuming west via Marine:

c. 1951, USGS
That is the view a traveler would have had as they drove off the ferry: eastbound US 30 was straight ahead one block and then to the left on Commercial.  Until at least 1938, southbound US 101 was straight ahead and then right on Commercial.  If the 1951 map can be believed, then at some point traffic was moved off Commercial and onto Marine instead.  At that time southbound US 101 would have continued to the right on Marine, and also to the right (after 1951) was the west beginning of US 26.  But here is why I question the accuracy of the 1951 USGS map:
In those shots one can see past the Astoria peninsula and across Youngs Bay.  Ahead the road curves to the right and traffic essentially makes a 360-degree circle to descend to surface level at Marine Drive.  At the stoplight there, signage welcoming travelers to Oregon and Astoria included a reference to the west beginning of US 30 and the west beginning of US 26...
During Dave's 1999 visit, he noted that "US 30 ends with a complete lack of fanfare in Astoria.  There are no special distance signs, and no 'end' marker."  Fortunately that changed a bit after the signage replacements that took place in 2004:
If OR DoT typically used "End" markers, this is probably where an "End US 26" sign would have been posted.  But historically they have not, and the two exceptions are recent: the "End US 30" assembly shown above, and an "End US 26" sign at its new terminus.  The green signs ahead are shown close-up here: 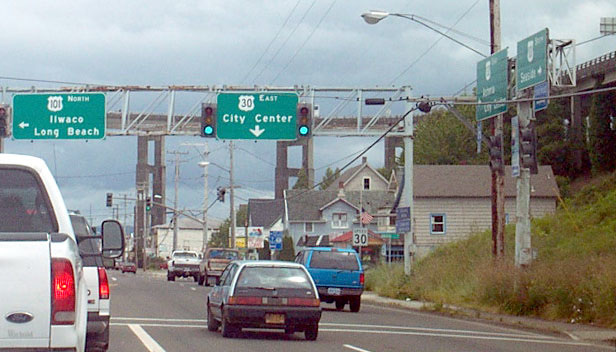 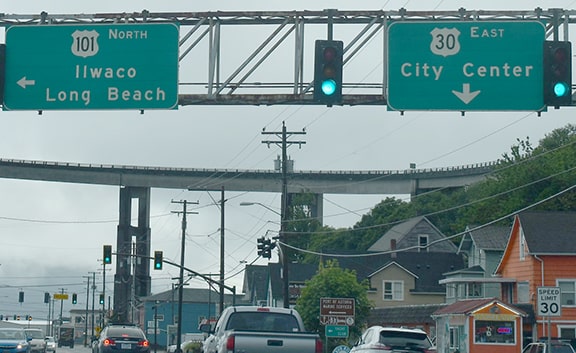